Our last day of our Alaska cruise on the Silversea Silver Shadow after our early morning visit to the Hubbard Glacier was a sea day with most of my time spent lazing around, trying to catch up on work…with very intermittent internet, trying not to think about our long trip home.

I did spend some time chatting with the Silver Shadow’s Hotel Director, Herbert Huber, about our experience.  He is an interesting, concerned and very likeable man…consistent with every person involved with Silversea’s management.  Our frank chat about the hits and misses, differences between cruise lines and a bit about our personal lives was very enjoyable and which we continued during pre-dinner cocktails.

Upon returning to my suite I remembered it was the Galley Lunch.  It had quite an assortment of offerings, but as noted by a number of guests there, curiously, were no Alaskan culinary items. 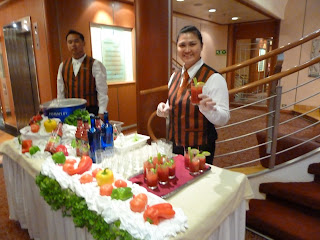 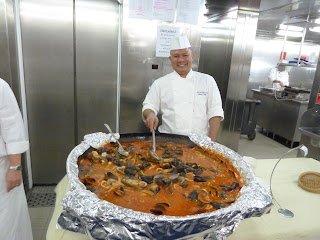 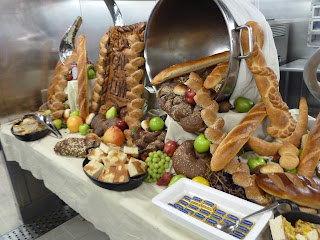 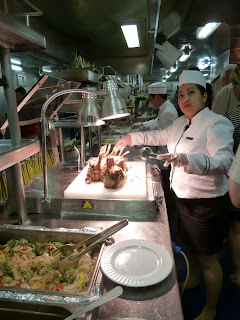 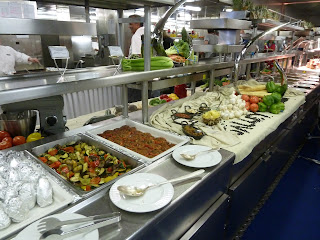 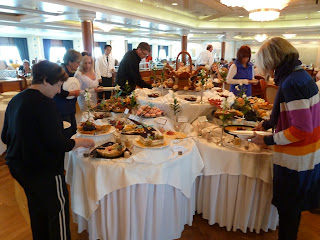 As our lunch was finishing and the dining room was quieting down, our favorite waiter in The Restaurant, Stephan, really opened up and had a nice conversation with us.  The Maître de has previously noted that there was one Turkish waiter, Tyfun, and he came over to give my wife a bit of practice speaking Turkish.  While it was great that we had these more personal experiences I wish they had started earlier in the cruise.

Upon returning to our suite we found our bags cleaned and displayed on luggage racks.  I like this better than a vinyl mat placed on my bed.  Why? Because it allowed me to take a nap (yes, I took two naps on this cruise!) without taking everything off my bed.  After my nap, it was time to pack.  Yogesh, our butler, offered to pack us and, while I understand that some would love to have the drudgery taken care of by others, I don’t think anyone should be fussing with my dirty laundry, so I happily handle the 15 minute task.

After cocktails it was time for pre-dinner drinks (we skipped the Captain’s Farewell) and one last dinner in Le Champagne, a cigar with “the cigar crew” and bed for a planned, but not attained, good night’s sleep.

We were up early, Yogesh brought us our final coffee, tea and croissants, and off the ship by 7:10 a.m. to board the complimentary scenic train ride to the Anchorage Airport.  As we cleared Immigration before boarding the cruise in Vancouver, our luggage went straight from the ship to a holding room at the airport so the usual post cruise hassle claiming your bags was avoided.  That is a very nice touch.

Our train was not the fanciest affair (Silversea does not own private cars as to the larger cruise lines), but it gave us a 3.5 hour scenic ride in sufficient comfort and with our amusing Alaska Railroad guide, Winnie, adding some nice color.  Some of the views were spectacular. 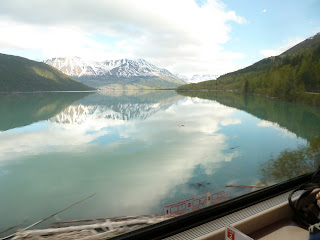 Drinks and food are not included and the prices were steep, but Winnie did make a good Bloody Mary and the sandwiches weren’t bad.  It was also a nice time to meet some folks we had seen, but not talked with while on the ship and to say some final farewells to those we had.

As we approached Anchorage, Silversea representatives walked each car and explained (again…and it was needed for some) the very easy process of how to claim your bags.  The time it took from disembarking the plane to being checked in, through security and sitting in the lounge was no more than 20 minutes.  (Note:  If you flight departs at 5:00 p.m. you and your bags will be delivered to the Hilton Hotel in downtown Alaska.  If you are traveling on in Alaska you have your choice.)

From the time we disembarked the train to claiming our luggage, checking in, clearing security and sitting in the Alaska Airlines lounge (graced by the great Tony Bennett…adding a bit more class to our experience) took all but 20 minutes.  Pretty impressive end to our week on our Silversea Silver Shadow.