My 2013 Goldring Travel Food & Wine Cruise began with pretty much no issues.  Our four hour flight from Newark to Houston (bulkhead seats) were great.  Not so great was the guy sitting next to us who spilled his cranberry juice all over the place.  (Not a drop on me!)  One thing that bugs me is that if I am flying a former Continental aircraft there are movies, hot food, etc.  This was a former United one, so cold food and an overhead monitor…and broken wifi.  As I say all the time:  Air travel varies little from bus travel.

I was a bit concerned with our connection in Houston, but we arrived early and our flight departed just a little late.  It was a good stroll after the flight.

We had bulkhead seats for our 10 hour flight, but this time the middle seat was open, so we had extra room.  The bonus was…because it was me…a brand new baby sitting (‘er crying) next to me.  This is where my Soul noise-cancelling headphones (Usan Bolt edition - thanks to my daughter's trying to give me some style), great music (I’ve been listening to a good bit of country of late…especially Brad Paisley) and wine come in handy.  After tending to some emails and doing some writing, I settled in and slept really well.  The 10 hour flight wasn’t bad.

Passport control wasn’t too much of a hassle and the luggage started to appear fairly quickly…but not our bags.  Here we go!  So as I am getting "that" feeling a nice woman said, “For some reason they placed some of the priority luggage over there.”  And there they were.

I usually hire a car to meet me at the airport, but in Rio it just doesn’t make any sense.  As soon as you leave Customs, there are a number of taxi stands where you pre-pay for your taxi with a credit card…and get a decent (not great) rate on currency conversion.  So for virtually no hassle you have your car and a few real in your pocket. The trip to Copacabana Beach is about 40 minutes due to the traffic.

I must say that the ride in is rather disturbing.  Poverty and graffiti is everywhere.  But after you emerge from a long dark tunnel you are in a different world:  Copacabana.  There was record heat today (100 degrees) so the Speedos were out, but I was not.

Staying at the Sofitel Copacabana is a treat.  While it is located at one end of Copacabana, the hotel is beautiful, the staff is incredibly accommodating and I did not mind the upgrade to a one bedroom suite with a great view of the beach and an Executive Lounge that is well-stocked and very comfortable. 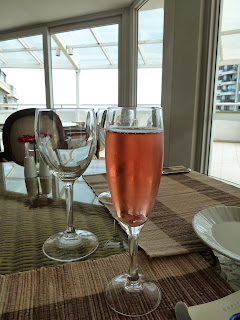 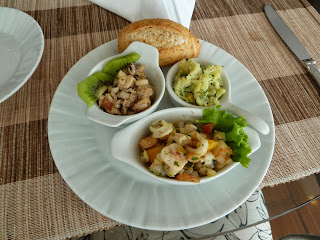 I just wish there was something to do that inspires me.  Driving to see the Christ the Redeemer statue?  Taking a cable car to Sugarloaf Mountain?  Visiting the favelas (slums)?  (I can tick off the beach!).  None of those do much for me and, to be sure, not being one of the beautiful people, strolling on a beach is like waiving a flag that says “Tourist”.

So there is only one thing to do:  Eat!

Brazil is known as a country of meat eaters and churrascaria are, plain and simple, meat restaurants.  One of the most famous and popular upscale ones is Porcao (say it like por-chow).  Porcao has  four venues, but Rios is supposed the best of them. 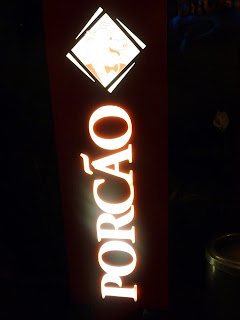 Time to hop in a taxi and find out.

We drove along Copacabana beach at night with various small bars and eateries open…some definitely more popular than others.  It was interesting to see folks jogging at night and walking around, but the lighting is definitely bright and there are tall fences most everywhere.  If you are a local you probably are fine, but taking things in from inside a taxi just makes sense as there is no “gotta see” places that I could find along the way.

Arriving at Porcao you could easily think you are at an upscale Miami restaurant…until you walk inside. There is a huge buffet of all sorts of things, but trust me you will never get near the thing. 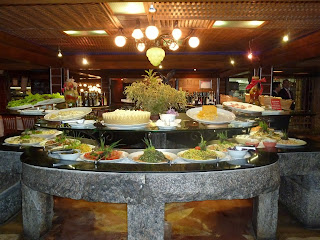 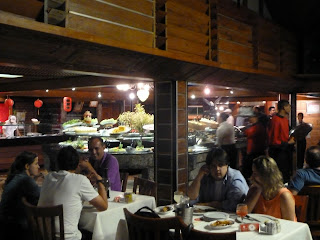 As soon as you sit down you are given a round sign.  Green on one side and red on the other.  Green means bring meat. Red means no more. 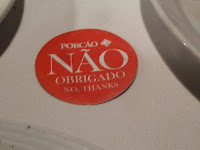 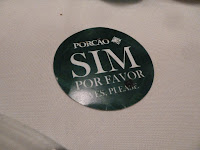 Within three minutes of sitting meat was on my plate.  Absolutely delicious chicken and gizzard.  Then some sort of beef. 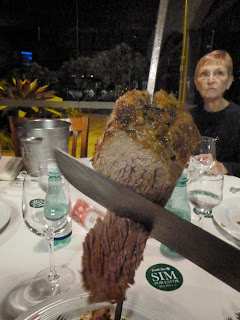 Then wine…not a good list, so we figured on trying a Brazilian rose – Villa Francioni.  Considering how salty the exterior of the meat was, it was actually a pretty good choice. 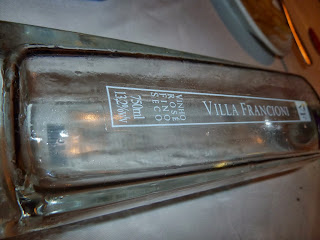 Oh yes, back to the meat.  Filet.  Sirloin.  Flank.  Some unidentified meat. 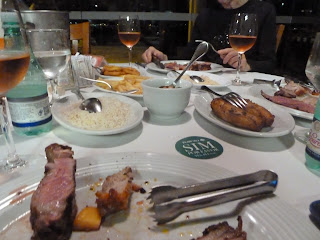 Then lamb chops.  Lamb steak.  Back to the beef.

And then, after what is most definitely the most meat I have ever eaten in one sitting (and it was all excellent) not another mouthful was possible…until the pork ribs arrived.

Somehow we were able to stop them and headed back to the Sofitel for a nightcap and a long sleep before heading over to the Seabourn Quest in the early afternoon.

Of course, when I awoke there was a message from Bjoern Wassmuth, head of culinary operations for Seabourn...just checking in. This is, of course, a Seabourn cruise and the details matter...a lot.