The night before the cruise is to start I dined at Le Champlain at Chateaux Frontenac Hotel.  Is it a Four Diamond restaurant which is truly a restaurant within a hotel rather than a hotel restaurant.  It was a truly memorable dinner.  We started with a unique Caesar Salad prepared tableside followed by truly the best sweetbreads I have ever eaten; rich and flavorful, but at the same time giving me the feeling of comfort food.  This should have been enough (actually it was), but it was followed by perfectly prepared duck which I paired with the same Phenix Quebecois red.  Everything was outstanding, but something was missing.  It was my attitude and emotion.

Alas, I was just looking forward to the Walking Food Tour of Quebec City and then boarding the Seabourn Sojourn.  The former because I wanted something more than great food; I wanted a personal experience and the latter because I wanted the feeling of familiarity, if not ‘homeliness”.  So some pretty great food in a very nice setting was, in fact, something that was rather emotionless.  It is something to remember when thinking the most expensive or the fanciest is the best…which, obviously, is not always true.

Yesterday morning we met Jocelyn.  She would take us to the “other” Quebec, walking us through parts of the city that the tourists never really see.  (It actually was close to where I had wandered the day before)…and she filled in the blanks with a wonderful overview of the development of Quebec and its cuisine.  I will not bore you with the specifics, but I will say that Jocelyn provided our group with some great insight and then the treat of the local Marche (market). 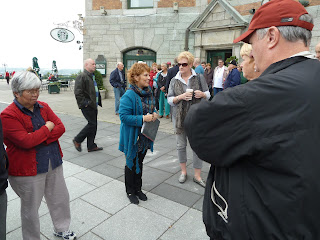 Before we even had the chance to enter the market proper we were greeted by one of the local producers who has taken over her business from her great grandparents, then her grandparents and then her parents.  We sampled, at her stall, the freshest blueberries and then two types of maple syrup and the maple butter.  Then to another stall where we had incredibly sweet strawberries.  Then it was off to try some of the best cured meats I have ever tried – equal to some of the world class experiences in Italy.  (Unfortunately it was but a taste…and without the wine or time that they truly deserved.)  Then some local cider and ice wines and then, finally, to some outstanding Quebecois cheeses.  (I later purchased some for our Food & Wine Tasting near the end of our cruise.) 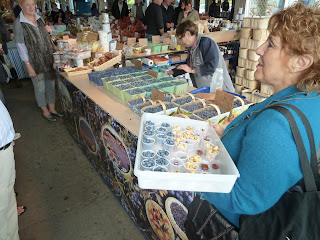 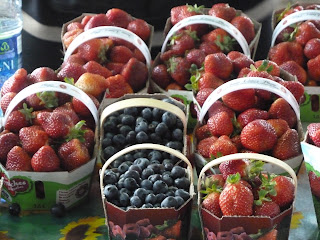 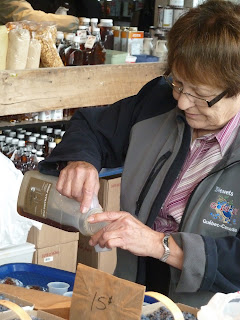 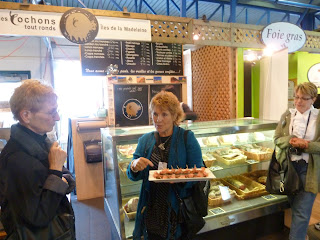 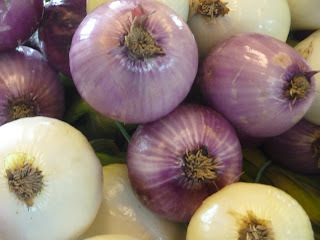 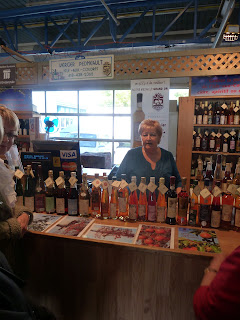 Being truly overwhelmed with the richness and freshness of all of those flavors, we were then off to Moss Bistro for mussels.  But this is a truly local place where they offer mussels prepared about a dozen ways.  I had Mussels with Two Mustards.  I was surprised to hear that this is their most popular with the locals…until I tasted them.  Fantastic….and paired with the “lowly” local Labatt’s beer (reminding me of my college days).  Others had more traditional preparation with white wine and garlic, others with Roquefort cheese.  A great way to end our time in Quebec City. 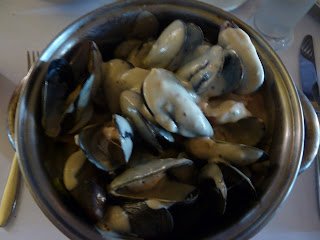 It was then time to board the Seabourn Sojourn…where it was the best of times and the worst of times.  After the obligatory unpacking and muster, I headed, as I do, to the forward hot tub for the sail away…with a bottle of champagne in hand along with my good friend.  There we were met by another couple that started with a conversation about how it was their first Seabourn cruise and far superior to Silversea…and then “The List” came out.  You know the thing I dread the most:  Where a great experience is broken down so that the little misses (like Seabourn could tend to the husband’s shoes, but was not prepared to polish the woman’s shoes).  No matter how much I tried to change the conversation to the positive, it turned back to the negative of this ship or that, the pushing of long known to be false rumors, etc.  It became exhausting and exasperating rather than relaxing.  Hopefully tomorrow will be better…as I enjoy my city of pleasure while that other couple enjoys their city of The List.

Still being fully satiated, I was going to skip dinner entirely. I met up with some of my clients that I spend hours on the phone with, but have never met in person.  It was a great time and I eventually joined the two couples at the Patio Grill.  Ironically, I had never eaten dinner at the Patio Grill.  I ate very simply: Branzino (sea bass) grilled perfectly.  And, more importantly, really enjoyable conversation and laughs.

I returned to my suite about 10:15 pm (a new early night record for me) and sat on my balcony in the cool, rather stiff, breeze enjoying some nice wine and listening to Jimmy Buffet.  I seemed drawn to two songs:  He Went to Paris and Changes in Latitudes.  There are times that you just need to focus on the wonders and pleasures of life; not the issues that can nag you and bring you down.  Patio Grill versus Hot tub.  Enjoying your cruise or analyzing the hell out of it, it is your choice.

It is my job to analyze everything.  I notice very nick on a piece of furniture, every dropped spoon, bottle clank, untucked shirt, lack of a smile, slight service lapse.  But also this is my cruise and I don’t spend my time making The List.  That said, the crew from my stewardess to the barmen are doing a great job and I am enjoying the fact that I know this is going to be a great cruise.