Crystal Cruises is, to my mind, a great “move up” from a premium cruise line (Celebrity, Oceania, etc.) and also a wonderful “move over” from the luxury lines (Seabourn. Silversea, Regent, etc.).  But there are a number of misperceptions that have kept this presently two ship (and rapidly expanding and diversifying) cruise line from being at the fore of many traveler’s thoughts.  And that is why I have taken this November 13, 2015 cruise from Lisbon, Portugal to Madeira to the Canary Islands to Malaga, Spain and ending, finally, in Monaco.

I especially liked this itinerary, not for its uniqueness, but its economies; focusing on it being a great value proposition…and not just for the cruise.  Because the ship does not depart Lisbon until 1:00 a.m. technically on Day 2, we had the ability (with just a touch of trepidation) to fly into Lisbon the same day (avoiding the cost of a hotel stay) and have time to enjoy the city with a bit of cushion should there had been flight delays or lost luggage…which fortunately did not happen.

We arrived in Lisbon, Portugal early in the morning (7:30 a.m.) and, after a quick coffee, were met by our outstanding guide, Susana, for a private tour of Lisbon.  Susana honestly reaffirmed what I already knew:  Lisbon has suffered terribly from a depressed economy and a declining population.  It was understanding the attempted rebuilding of the business and financial sectors (and the accompanying residential market) by moving them to the new Expo area (with some wonderful modern architecture) that provided a first-up important perspective of the city…the famous older part being virtually abandoned other than for the tourism and hospitality industries.

We then visited Pasteis de Belem for one of Lisbon’s delicacies, custard tarts.  This bakery is well worth the visit as is taking some time to sit in one of the many rooms of is almost 200 year old building and enjoying a tart or two…with a glass of tawny port (even if it is only 10:00 a.m.)


After a few more sites, just near the famous Tower was a little, funky, van with a sign “Wine with a View”…and you know that sucked me right in.  Two glasses of white port, please! 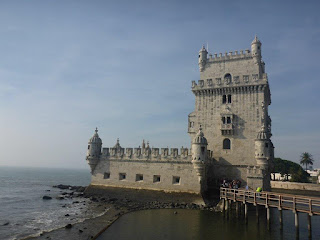 And then, Oh Boy! What I a view did we have. (And they did it because they wanted to sit in our chairs.  Seriously???

From there we visited Padrão dos Descobrimentos (the Discoveries Monument) that was created during the dictatorship of Salazar, but remains one of my favorite modern sites. 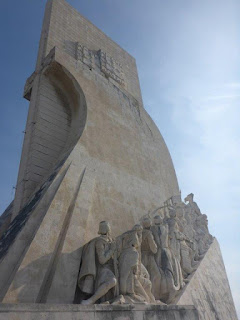 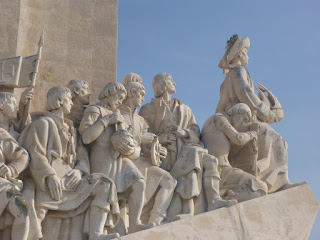 As we were heading to the old town Susana pointed out Mercado da Ribeira, also known as the Time Out Market, in Lisbon.  This is a new venture with a farmer’s market on the right and a massive food hall with various take-away restaurants lining the walls.  I asked if we could stop for a look; as these sorts of places can either be a tourist trap or a real find.  (Anthony Bourdain is developing a somewhat similar, though more diverse, concept in New York.).  Susana said we could pop in for a look, or if we wanted to eat there we could.  Well, the food hall was interesting, but not for me.

However, I found an area behind the food hall with a few restaurants that most never even venture into and there it was:  Mariscada Azul. What attracted me was the beautiful seafood display, but what got me to stay was the friendly, but understated, staff.  And with that we pulled up two stools (this is not a typical restaurant) and before we could even order the waitress placed three delicious things in front of us:  A gooey, smelly, runny…and wonderful…sheep’s cheese, an octopus salad and delicious Portuguese bread with a buttery herb spread.  I had been waiting for a pata negra (Iberico ham) and they had a leg of it right there and sliced off a plate for us.

But then there was a sign for cod, or bacalao.  Interestingly, as Susana had mentioned earlier, the Portuguese eat a tremendous amount of cod, but never fresh.  It is always salted and, thus, made into bacalao.  Even more interesting, just this past June on the 2015 Goldring Travel Culinary & Cultural Cruise we visited Tromso, Norway (where I held one of our events) and visited one of the processing areas where the cod is dried and salted.  [I am really blessed to be able to tie this very important and international culinary and cultural item together in a matter of a few months!  And now you know why Goldring Travel doesn’t just have Food & Wine cruises; we do so much more!]

Anyway, we obviously ordered the cod with potatoes.  It was fantastic, but actually the potatoes could have stolen the show on that plate!

But while that was being prepared I spotted two of my favorite foods:  Razor clams and Gooseneck barnacles; the latter being a real delicacy with a unique flavor and texture.
We, of course, paired our feast with a Portuguese Alvarinho wine.

After lunch we drove through the old town portion of Lisbon, which is really being renovated and upscaled with many more restaurants, cafes and shops being present than the last time I was here.  But with full stomachs and the Crystal Serenity waiting for us we decided to head to the ship (now it was about 2:30 p.m.).

From the time we arrived to getting to our Penthouse took less than 15 minutes and our bags arrived about five minutes after that.  Very impressive.

What I notice almost immediately is the layout of the Penthouse is very similar to the layout of the new Crystal Esprit yacht!  So over the next nine days I will be figuring out how well it “lives”.  But no sooner did I notice that my doorbell rang with our butler, quickly followed by our two room stewardesses, introducing themselves.  Crystal Cruises really does a wonderful job of making you feel welcome as soon as you board.

We had contemplated getting settled, but then heading out into the town (which in Lisbon is walking distance), but with the mandatory muster at 8:00 p.m. we decided it would be better to enjoy the Crystal Serenity for the evening rather than try and do too much.  Options are a good thing, and to be sure, as you will see throughout my articles, one of the strong points of Crystal Cruises is that you have many options available to you…and being able to check in and then go out on this cruise is just one of them.
After unpacking we took a stroll around the ship, which is similar, but still different from, the Crystal Symphony which I sailed on a few years ago.  Most of the public spaces are located in the aft third of the ship on Decks 7 and 6 with Reception and the Main Dining Room midship on Deck 5.  The larger lounges are on Deck 12 and 6 forward.  In other words, this midsized ship is very easy to understand and get around.  (The concern by some luxury travelers that the Crystal Serenity is too large simply is not well-founded.)

After our stroll, we sat in our suite and enjoyed a glass of champagne before heading to dinner.  On Crystal Cruises your alcoholic beverages are included, so reaching into your stocked refrigerator is very convenient…as is stopping by one of the various bars and lounges.  (A little niggle is that the refrigerator gets cool, but not cold.)

Time for dinner!  On Crystal there are three dining times:  Early (6:30 p.m.), Late (8:30 p.m.) and Dining By Reservation.  As I did not want to bother with making a reservation each evening, Crystal’s late seating at a table for two was perfect.   The service and cuisine was very good and a sommelier serves the complimentary wines.  I must note that the complimentary wines so far are superior to those offered by Seabourn…though I am not so sure the sommelier is really as knowledgeable as he should be. (I was having a seared ahi tuna appetizer and he suggested I switch to the offered pinot grigio rather than the cabernet I was drinking.  Not a good pairing.)

After dinner it was time to enjoy the rest of the evening.  We started in the Connoisseur’s Club which is, by far, the nicest cigar lounge at sea.  The staff quickly brought me a Glenfiddich, which I noticed is in higher quality glasses then elsewhere on the ship, and I was quite happy.  Literally steps away is Avenue (a very social and popular piano bar) the Stardust Club (a larger venue for dancing and talks) and, Pulse (the disco) and just a few steps further is the movie theater.

The concept that Crystal Cruises is only for older travelers is not exactly accurate.  Debunking that was the last stop on our first evening:  Pulse.  Suffice it to say, the night went past 2:00 a.m. and that is just not an option on most luxury cruise ships.

All in all an excellent experience…and this cruise is just getting started!