Our last night in Hanoi was quiet as our plans to walk to a small café somewhere were literally rained out.  It poured.  There was thunder and lightning.  And then it did it again and again.  Hence, the Sofitel Metropole bar was our destination.  A nice time, but also a bit of a minor disappointment.  It happens.

It is the first time in a very long time I had to do the “pack up and put your bags outside your door by 6:30 a.m.” thing.  I am not loving the sort of living out of a suitcase aspect of this portion of the trip, but it is a minor inconvenience; especially since this trip is so informal.   (Note:  You are asked to take only an overnight bag to the junk on Halong Bay.  We were fine, but a number of guests were not aware of this and were not prepared with an overnight bag of any sort.  A note would be a simple fix to what, as you will see, is actually a very convenient and logical system.)

After another wonderful breakfast it was time to get on a bus for a relatively short-in-distance drive to Halong Bay.  As quickly…or not so quickly…became clear, Vietnam is a place where travel between two points (airport to city or Hanoi to Halong Bay) is measured in time.  This is because of single lane “highways” of varying quality and a maximum 40 kilometer per hour speed limit.  So our trip took, including a mandatory stop at a clearly government -sponsored souvenir shop, almost 4.5 hours.  It was about an hour longer than advertised because we wound up behind two very slow moving vehicles for quite a distance.

Along the way we saw a Buddist monk who is traveling throughout Vietnam seemingly touching his nose to the ground every few steps.  Crowds gather honoring him as he reaches their small towns. 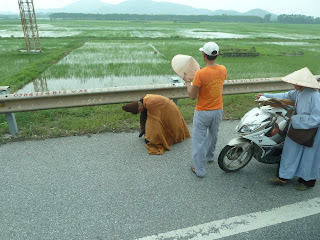 We finally arrived in Halong Bay.   The bay is filled with thousands of limestone outcrops or islands that rise out of the sea.  The bay is truly beautiful.  The cloudy skies beckoned a real threat of more rain.  We quickly boarded our ship, Indochina Sails IV, which – kept in perspective – is truly is a “luxury” junk.  The main deck is the dining room aft and lounge forward with two decks of cabins below and a large open deck (with nice wood chairs, tables and lounges above). 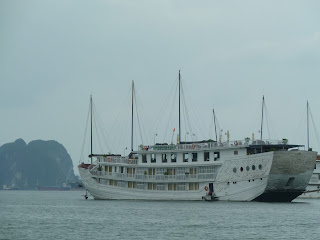 Our cabin is spacious with a very good bed with fresh linens, a huge marble bathroom with a Jacuzzi (my son discovered that the spa in his cabin has lights when you turn it on), large shower and excellent air conditioning. 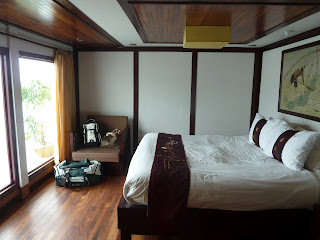 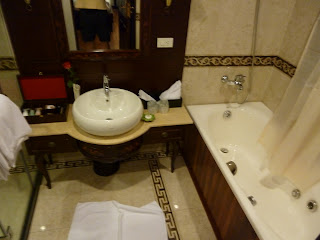 The service is very friendly, even sweet, but not terribly polished.  The food is fine (Vietnamese themed, but American/Canadianized in flavor…read “very attractive, but fairly bland”), but there is a real concern for any dietary restrictions such as vegetarian, no seafood, etc.  Alternatives to the fixed menu (lunch) or buffet (dinner) are seamlessly brought with a real concern that it is an acceptable substitute.  If you remember this is a luxury junk in a pretty remote area and not a luxury cruise ship your overall experience will be very pleasing. 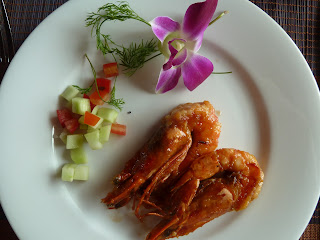 One disappointment is that the Vietnamese government recently ordered all of the junks in Halong Bay to be painted white…which really was a bad idea as these beautiful culturally designed boats have lost much their exterior charm.  I think some governmental official thought painting them white would make them look like yachts or mini-cruise ships and, therefore, more attractive to Western tastes.  In fact, as a yachtie and a cruise person, I look around our ship – clearly the nicest around – and see white overspray everywhere as the mandate was begrudgingly complied with similar defeated compliance by the other junks as well.


As we cruised around a portion of Halong Bay, one of those dreaded groups made themselves known.  I had not seen them before as we have been broken up into two smaller groups and now everyone doing the pre-cruise land portion was together.  An obnoxious travel agent from Vancouver and her souvenir/junk jewelry frenzied group of ten have made themselves very well known - by being quite loud and quite rude (towards the staff, tour guides and fellow guests) because, alas, it is all about them.  (This was eventually addressed after I confronted her and she mentioned something about my mother…not a good thing to do; especially to a guy from New Jersey!) 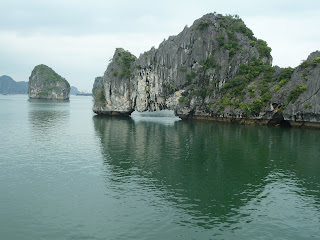 After a very nice lunch we went to a floating fishing village.  The concept was that four of us would get into basket boats paddled by a local village woman and then glide past the various homes, boats and fishing gear.  When the skies opened we went to Plan B, which was staying on our tender – fairly dry (in our provided disposable ponchos) - with our local guide telling us a bit more detail about the life in a fishing village as we cruised around it.  It was quite interesting and a pleasant time to be sure.  (I am not going to get into all of the thoughts I have about many of the details here, but after the trip I will write a more reflective article.) 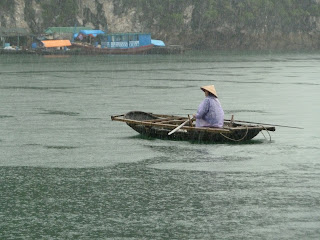 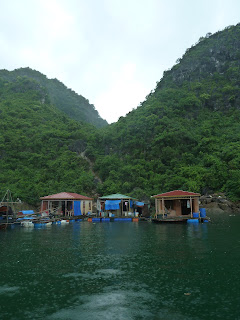 After a bit of a cruise we went to another location where a number of junks were anchored, giving people the chance to swim off a sand beach or climb to the top of the limestone island to a lookout.  We chose to remain onboard to just enjoy the view…and the silence (as the Canadians – as they are now known - were going ashore; noting that not all of the Canadians our trip are boorish).

It was at this time, with the clouds and mist forming, before an evening rain that Halong Bay became breathtaking.  To me it was a “moment” and made the long journey here worthwhile. 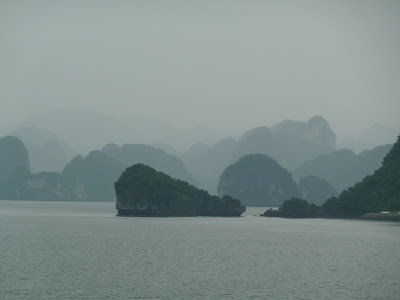 It also struck me, after listening to our children complain a bit about the long bus ride, that the longer drives on this trip are a bit like going to Six Flags Great Adventure Amusement Park.  You spend a considerable amount of time traveling and waiting for a 2 minute ride that gives you a huge rush, and then you wait for hours again and get another rush after another 2 minute ride.  At the end of the experience you have waited more than you have been on rides, but you have had a great day.  On this trip, however, the experiences are longer and the rush will, I am sure, last a lifetime!

But I digress.  As we took in the view, a woman in a small boat came along side trying to sell potato chips, wine, beer and vodka.  It was, in contrast, one of those other moments when you see that tourism maybe doesn't preserve that which we have come to see.  But alas I have seen the same thing all over the world.  It reminded me that Halong Bay ten years ago is probably not what it is today and that coming here now, rather than ten years from now, was a very good idea.


After cocktail hour first out on deck and then inside as the rain came yet again (or a wine tasting for $16 per person…which I skipped), it was time for buffet dinner with a wide variety of seafood, beef and chicken items along with various rice, noodle and vegetable offerings.  After dinner the rain cleared and we sat on the bow, anchored out, enjoying a chat and a cocktail looking at the stars and enjoying the breeze.

The next morning I was up at 6:00 a.m. to see the early morning light. 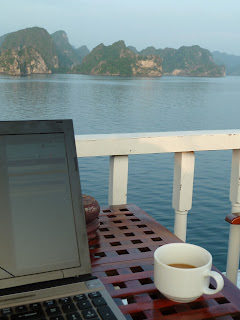 Ironically, I think Halong Bay is nicer in the mist.  I decided to skip the morning trip to some cave as I was told it can get crowded with a number of junks visiting it at the same time…It just smelled “tourist” without there really being any great ecological or geological interest. Between the desire to chill (taking in the views) and not wanting to engage in a crowded venue at 7:30 a.m., discretion said to let everyone have a bit of sleep-in before our long bus ride and then flight to Seam Reap, Cambodia later in the day. 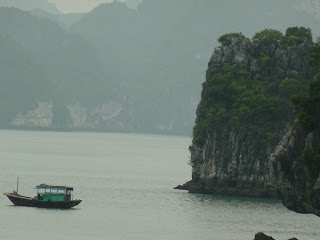 After enjoying the quiet beauty of Halong Bay, as we started to motor to port, a very nice buffet breakfast was served.  We were requested to leave our cabins by 9:30 a.m. and to give all of our liquids to the tour guide (who always seems so happy) since AmaWaterways stored our luggage while we were on the junk and checked them in directly with Vietnam Airlines.  Our guide simply gives us a bag for our liquids, puts them all together, checks them as luggage and then distributes them at the hotel in Siem Reap, Cambodia.

AmaWaterways has a great little system that I wish I had known about in advance because it answered many questions I was pondering.  While on the junk we completed Cambodian visa applications and turned them in to our guide with the $20 per person fee.  They were paired up with our pre-junk delivery of our passports to him.  This resulted in our boarding passes for our late afternoon flight to be obtained and our luggage checked-in in advance…and after being given back our passports at the airport just long enough to clear Passport Control…we returned them to our guide so that he could obtain all of the Cambodian Visas immediately upon arrival in Siem Reap without any of us waiting in line.

After disembarking at about 11:30 a.m. we headed off on our bus to the Ha Noi Airport, stopping at a small vegetable farm and then a golf club for a lunch.  As our flight was delayed about 1.5 hours, we had plenty of time to break up the journey and, in the end, it was actually a very easy trip; especially since our guide was so informative and personable.

When we arrived at the airport things flowed pretty much flawlessly.  A two hour flight later, we claimed our luggage (yes, it all arrived again!) and took a 20 minute ride to the Sofitel Ankor Phokeethra Golf & Spa Resort.  Due to our late arrival it was straight to the restaurant for an excellent buffet dinner.  I had Cambodian flat noodle soup with beef and seafood (Kuy teav?). 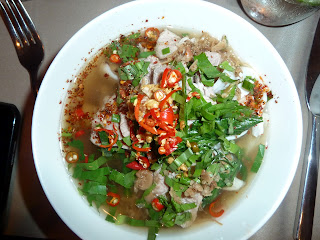 At dinner our liquids were delivered to us and our luggage was delivered right to our room.

One thing is for certain:  It is the rainy season.  The skies opened yet again, as we relaxed with a cocktail after dinner on the veranda.

I know, however, that the rain (if it happens) is not going to spoil tomorrow when we start exploring Ankor Thom and visit the AmaWaterway’s sponsored English language school.